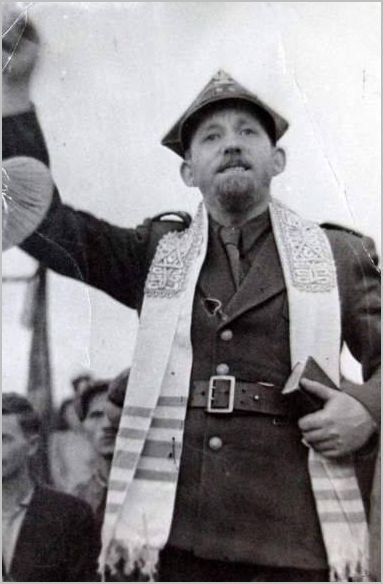 Dawid Kahane, born on 15th March 1903 in Grzymałów, was a rabbi with the rank of lieutenant colonel of the Polish Army and a chairman of The Supreme Religious Council in Poland.

He came from a family of rabbis who raised him in traditional religious spirit.   Kahane studied in Berlin, Wrocław and Vienna, where he obtained his PhD title in Philosophy. He was a student of Israelitisch-Theologische Lehranstalt, too. After his return to Poland, he settled in Lviv. During the war, Dawid Kahane was a member of the Lviv rabbinate, while working at the religious department of  Judenrat at the same time. He was a prisoner of the Janovski camp in Lviv. Kahane was saved thanks to Andrzej Szeptycki, the Greek-Catholic Metropolitan. After the war, he held the position of the chairman of the Executive Commitee of the Religious Council of the Organising Commitee of Jewish Religious Congregations in Poland as well as the chief rabbi of the Polish People’s Army (LWP). After the liquidation of field rabbinate of  the Polish People’s Army , Kahane emigrated to Israel with his family in 1949. There, he assumed the position of the chief rabbi of  Air Force. Between  1967–1975,  he was the chief rabbi of Argentina, only to return to Israel in 1975. Dawid Kahane passed away on 24th September 1998 in Jerusalem.