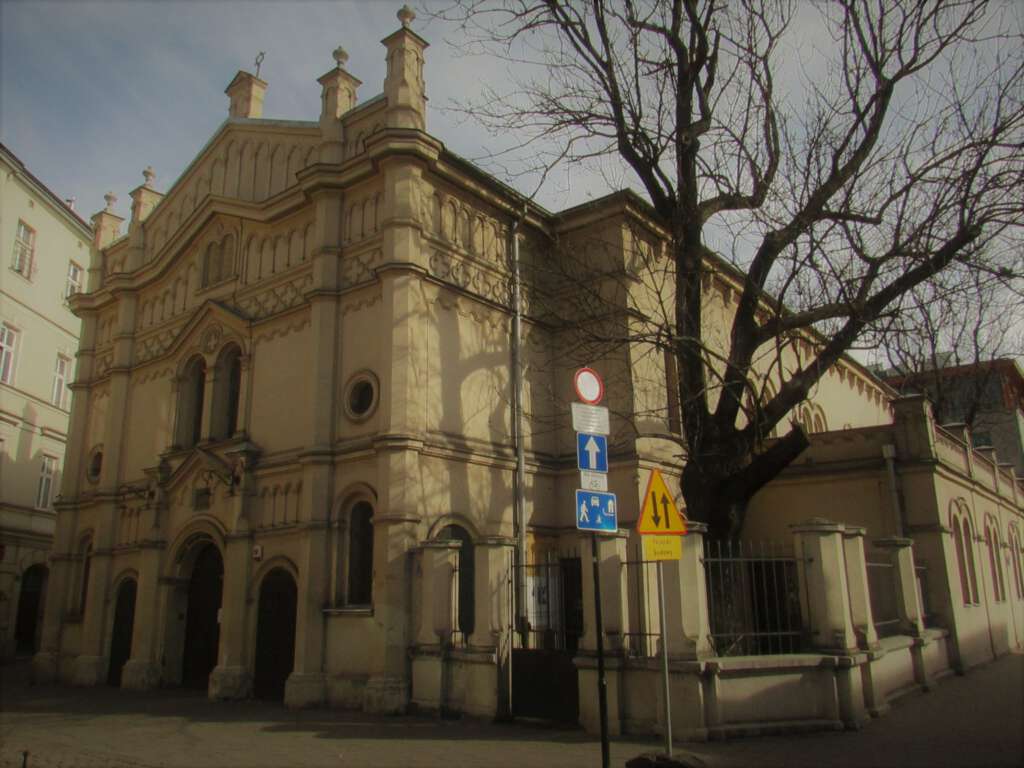 The synagogue is located at the corner of the Miodowa and Podbrzezie Streets. The building was constructed in the period 1860 – 1862 in the eclectic style: neo-Renaissance with Mauritanian components. The richly decorated façade is decorated with the Decalogue Tablets of black marble over the main entrance. The façade and side walls feature double-cased arcade windows with unique colour stained-glass windows from the turn of the 19th and the 20th centuries. Wall paintings including floral motifs are oriental in style. The ceiling of the prayer hall at the synagogue and the balustrades of the women’s balcony are decorated with colourful and golden stylised patterns. At the centre of the main hall, there is the bimah, while the monumental Aron HaKodesh of white marble is placed on the platform at the eastern wall, surrounded with a column balustrade and under a large golden semi-dome with a crown on top. On the premises of the Tempel Synagogue, there is also a mikveh, with the entrance from Podbrzezie 1 Street. The Tempel Synagogue hosts celebrations of Jewish holidays and other important events to which many guests are invited, including representatives of the municipal and regional authorities, universities, representatives of various religions, as well as the Jewish community and its supporters. Such special events include the Days of Judaism in the Catholic Church organised here together with the Archdiocese of Krakow.

Szeroka 40
Entry donation: PLN 5 / 10
Open hours:
Summer season: 09:00 – 18:00
Winter season: 10:00-16:00
After thorough renovation, the synagogue is now the principal prayer hall for the Jewish community of Krakow. It was built around 1558 in the Renaissance style. It was founded by a merchant and royal banker, Israel Isserles Auerbach. He built it for his son, scholar, outstanding Talmudic commentator, Krakow rabi, Moses Isserles, referred to as Remuh. At the eastern wall of the prayer hall, there is the original, late-Renaissance Aron HaKodesh carved in stone, dating back to the second half of the 16th century. It is crowned with a rectangular plate with Decalogue Tablets, placed on a pedestal with a verse in Hebrew. The niche for the Torah is closed with a two-leaf wooden door decorated in the Secession style. At the centre of the main hall, there is a reconstruction of the bimah surrounded with an iron-forged lattice, the two-leaf door of which, decorated with gilded reliefs, date back to the 18th century. Next to the synagogue, there is a Jewish cemetery established in the mid-16th century, one of the oldest in Europe. It is referred to as the Remuh Cemetery because Moses Isserles is buried there; religious Jews from all over the world arrive on the anniversary of his death to commemorate him at his grave. 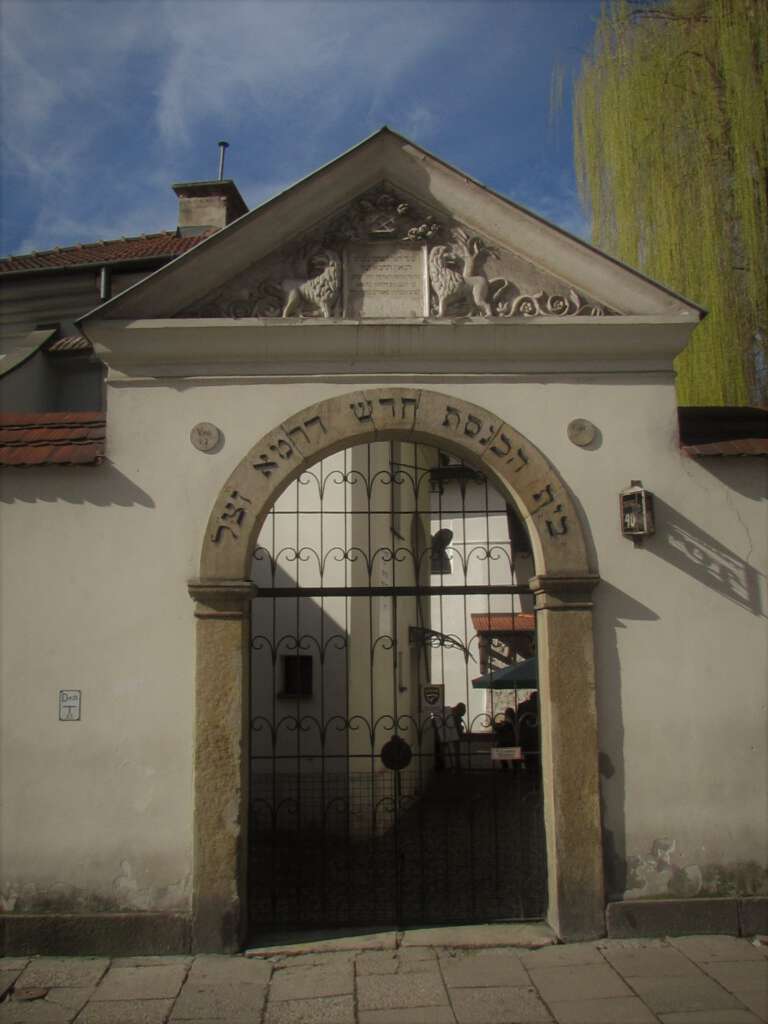 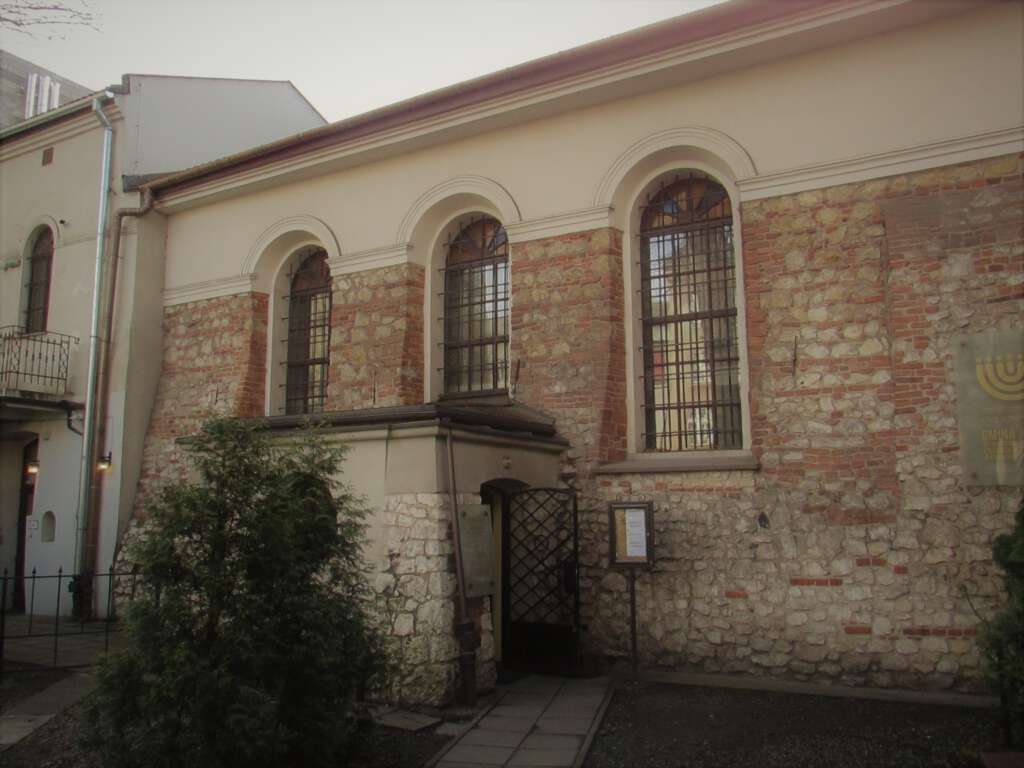 The synagogue is located at the northern line of the former Kazimierz defence walls, at the plot between the Warszauera and Miodowa Streets. Constructed in 1643 owing to contributions of the Kazimierz goldsmiths (the Hebrew word “kupa” means a contribution on the part of members of the community; the kehilla treasure, hence the name). It was built in Baroque style, as a simple form covered with a gable roof, whereas the only elements pointing to its sacral nature are the tall windows rounded at the top.
The prayer hall of the synagogue is richly decorated with paintings on both the walls and the ceiling. At the eastern wall, between the two windows, there is a seventeenth-century Baroque Aron HaKodesh. On the first floor, there is a women’s balcony that is open onto the main hall from three sides, and with a full cycle of Zodiac signs painted on the balustrade. To the left of Aron HaKodesh, there is a rectangular polychrome presenting the Table of Shewbread with 12 loaves symbolising the Twelve Tribes of Israel.
On Friday evenings, the synagogue hosts Shabbat dinners for members of the Community. During the Jewish holidays Rosh Hashanah, Purim, Hanukkah, Pesach (Passover), Simchat Torah, after prayers in Remuh, the ceremonial dinners are organized in Kupa.

The synagogue is located at the corner of the Kupa and Izaaka Streets. This building in the early-Baroque style was opened in 1644. It was founded by a merchant and president of the Kazimierz’s kehilla (board), Izaak Jakubowicz. At the main façade, over the gate, there is an arcaded porch, with flights of stairs placed symmetrically on both sides. This is the entrance to the women’s balcony, connected with the interior of the synagogue with semi-circular arcades. The main prayer hall of the synagogue features a ceiling richly decorated with stuccos.  At the walls of the main hall and the women’s balcony, one can see fragments of the polychrome from the 17th and the 18th century in the form of liturgical texts in decorative frames. At the centre of the eastern wall of the synagogue, there is a reconstructed early-Baroque Aron HaKodesh and, above it, one can see embossed Decalogue Tablets with a crown on top.

The Isaac Synagogue is owned by the Jewish Community. 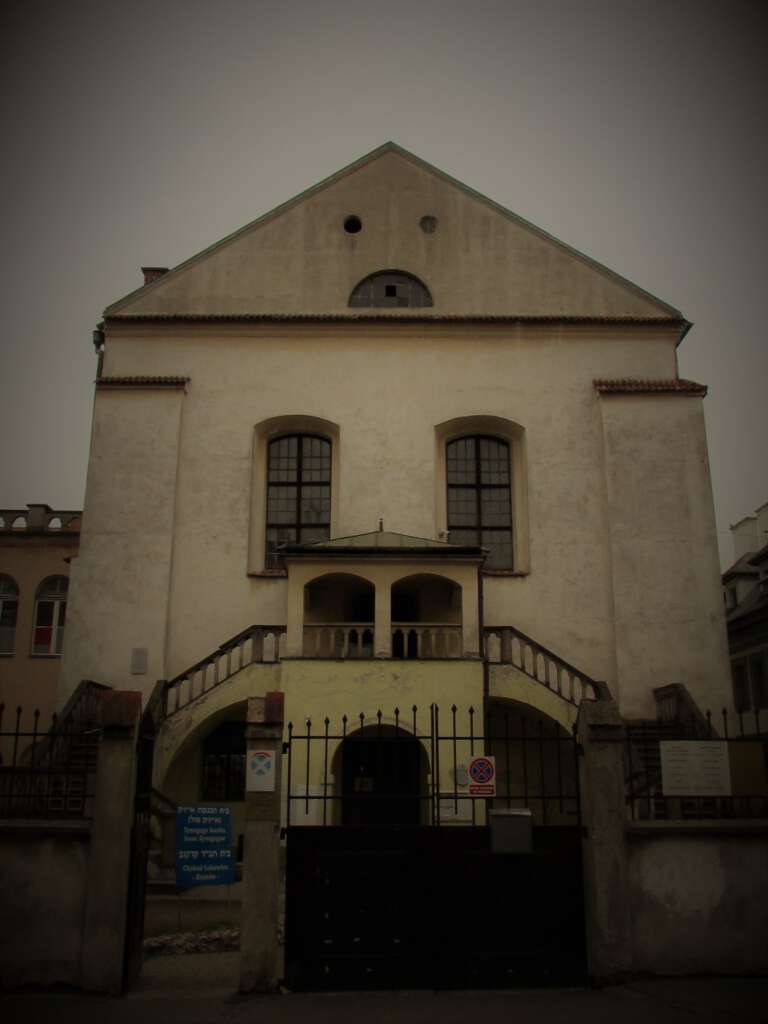 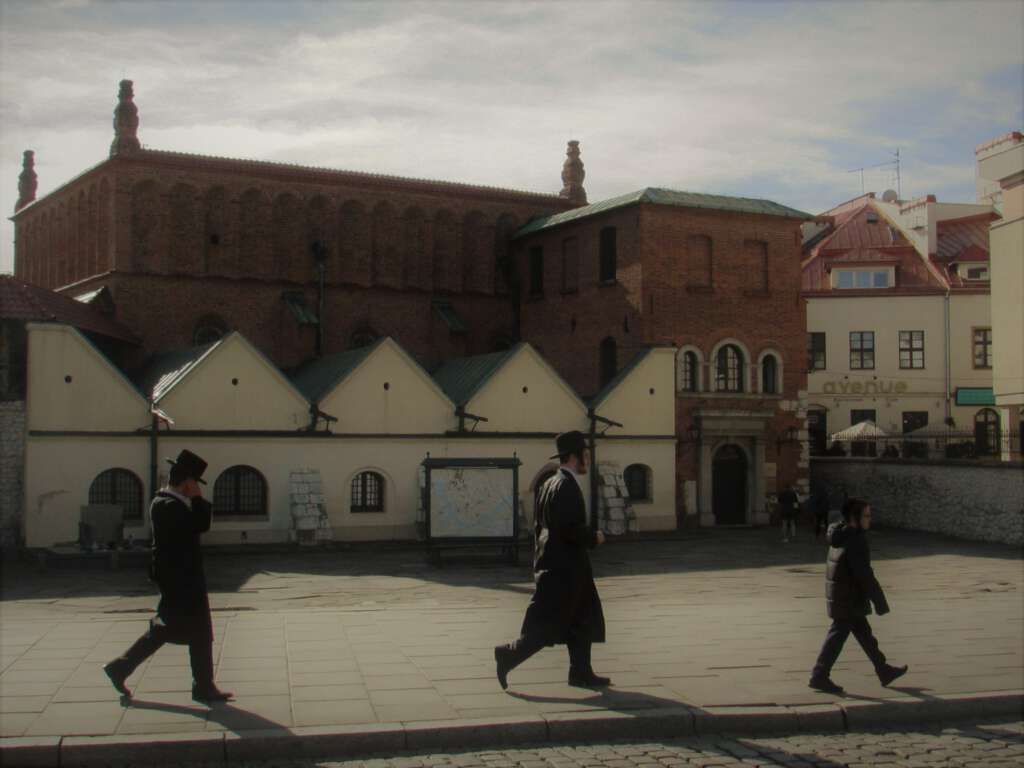 Currently Museum of Kraków – Old Synagogue
Szeroka 24 Street
The Old Synagogue is a symbol of history and tradition of the Krakow Jews because, until the outbreak of World War II, it constituted a centre of the Jewish religious life in Krakow. It dates to 1407, and its construction is related to the appearance of the Jewish diaspora from Prague, who arrived in Krakow after the Prague pogrom of 1389. The Old Synagogue is a typical two-nave Gothic synagogue following European models (Worms, Regensburg, and Prague), differentiating from its European prototypes with greater dimensions. In 1557, the building was almost completely burnt, and this was not the only fire in its history. It was rather quickly reconstructed, but now, following the contemporary trends, in the Renaissance style. Despite thorough changes, the two-nave layout was preserved, as well as the cross and ribbed vaults, while the walls were elevated and topped with an arcade attic. The construction works lasted until 1570. The next thorough refurbishment took place many years later. It was only in 1900 that, due to extremely poor technical condition and visual properties, the Old Synagogue Reconstruction Committee was established. Multi-phase construction works were conducted in the periods 1904-1914 and 1924-1925, significantly improving both the condition and the infrastructure of the synagogue, adding a neo-Renaissance element to its unique architecture. During World War II, the Germans deliberately devastated the synagogue by turning it to a warehouse. All the liturgical and archival items, as well as the precious library, were stolen or plundered. The synagogue was also ruined in its technical and architectural aspect. In the period 1956-1959, the Old Synagogue was reconstructed, restoring its unique appearance. The renovation was entirely financed from the state budget. In 1958, Krakowska Kongregacja Wyznania Mojżeszowego (Krakow Congregation of the Jewish Faith) donated the synagogue to serve as a museum. Details related to visiting can be found at the website of the Old Synagogue Branch of the Historical Museum of Krakow https://www.muzeumkrakowa.pl/oddzialy/stara-synagoga

The High Synagogue was built around 1556 under the privilege of King Sigismund II August, founded by an unknown donor. Its structure can be compared to prayer halls established in the Venice ghetto, where floors were added to a residential house in order to serve as a synagogue. Undoubtedly, as for Central European conditions, this is a unique synagogue.  During the “Swedish Deluge”, the synagogue was considerably ruined, but was renovated afterwards. In the late-19th century, a building was added to the High Synagogue (currently: Józefa 36), which housed the women’s balcony and an additional prayer hall on the upper floor. As all the Krakow’s synagogues, also the High Synagogue was devastated during the World War II by the Germans, who also robbed it of its liturgical items. After the war, it served as a warehouse. In 1966, the building was handed over by the government to Pracownia Konserwacji Zabytków (Heritage Conservation Studio) who performed the necessary refurbishment, thus helping to save this unique heritage. In order to adapt the building to its new functions, a number of construction changes were implemented: a staircase and additional entrances were provided, the ceiling in the main hall was altered, and that was also the time where the characteristic glass structure on the roof was added, while at the same time securing the polychromes and Aron HaKodesh. In 2008, the building of the High Synagogue was entirely recovered by the Jewish Religious Community in Krakow. At present the former main prayer hall has been made available for visitors. At the fourth floor of the synagogue building, in its part managed by the community, there is the seat of Krakow branch of Towarzystwo Społeczno-Kulturalne Żydów w Polsce (The Jewish Socio-Cultural Association). 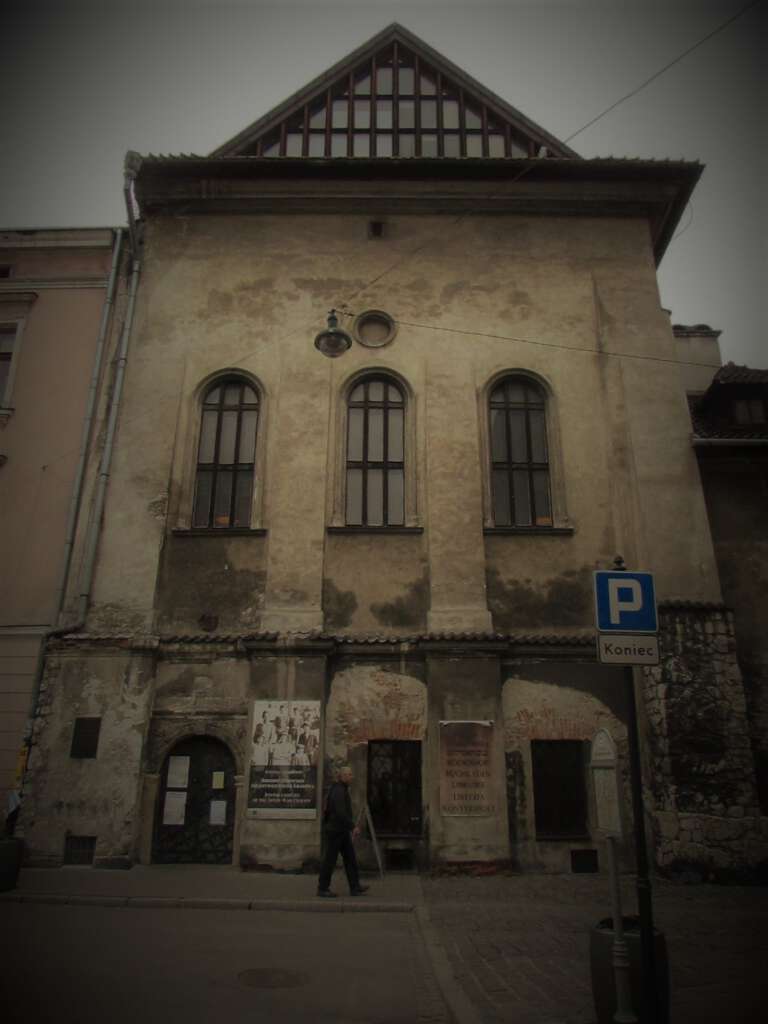 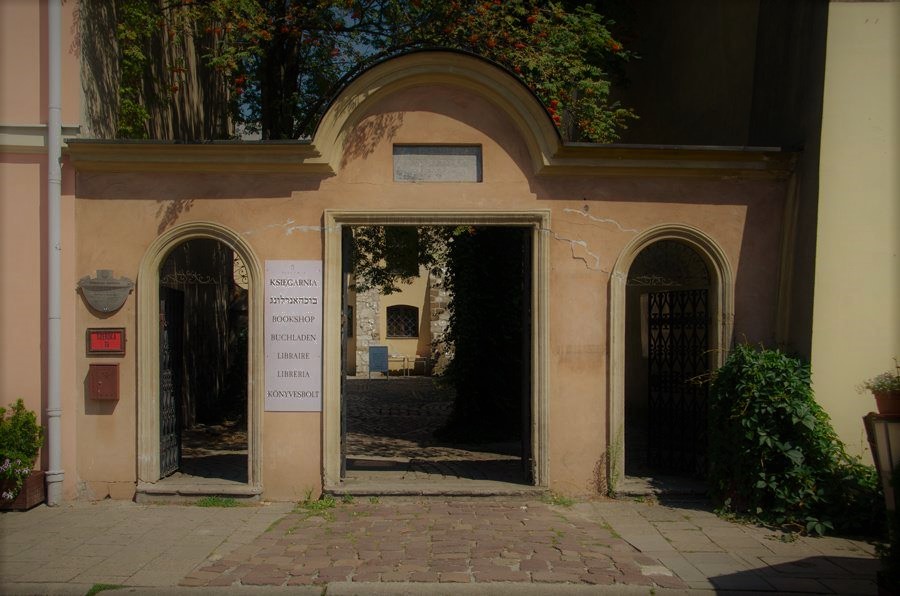 The Baroque building of the synagogue was founded in 1620 by one of the richest Jews in the Kazimierz District: Wolf the Stork, or Wolf Popper. Owing to his marriage with Cyrla, a daughter of a rich Krakow merchant Juda Leib Landau, and his flair for business, he quickly gathered large fortune. Unfortunately, he was not that favoured in his personal life. As Majer Bałaban writes: “On 20th July 1621, he became a widower; on 1st December 1625, he returned from a journey and was suddenly struck ill. Feeling he was close to death, he summoned a Kazimierz clerk (…) and drafted his last will in their presence.” After the Stork’s death in Kazimierz, the battle for the inheritance started, as a result of which this richly ornamented synagogue was handed over to the Jewish Community in Kazimierz around 1653. The Popper Synagogue was significantly refurbished as late as in 1827, when the women’s balcony was added, with reconstruction of the roof and the stairs, while the yard was separated from the street with the still preserved gate from Szeroka Street. The building was refurbished many times afterwards. During World War II, the Germans did not spare this synagogue either, devastating this unique heritage as well. In the several years after the war, the synagogue premises served as a place of residence to the Jews repatriated from the Soviet Union. In 1956, the municipal authorities turned the building into a cultural centre, evicting the Congregation who immediately protested the decision. In the period 1964-1967, the synagogue was thoroughly renovated. After the renovation, with the consent of the Krakow Congregation of the Jewish Faith, the Popper Synagogue building served cultural purposes, as a branch of Staromiejskie Centrum Kultury Młodzieży (The Old Town Youth Cultural Centre). It is currently owned by the Jewish Religious Community in Krakow, since 2017 housing the Austeria bookshop.

Every Friday, because of the beginning of the Shabbat, the synagogues are closed two hours earlier and on Saturdays they are closed for tourist traffic.
The synagogues are closed to the public during Jewish holidays and prayers.
In each synagogue you can rent a headgear for men.
The Jewish Religious Community in Krakow does not provide any guiding services in the facilities it makes available.