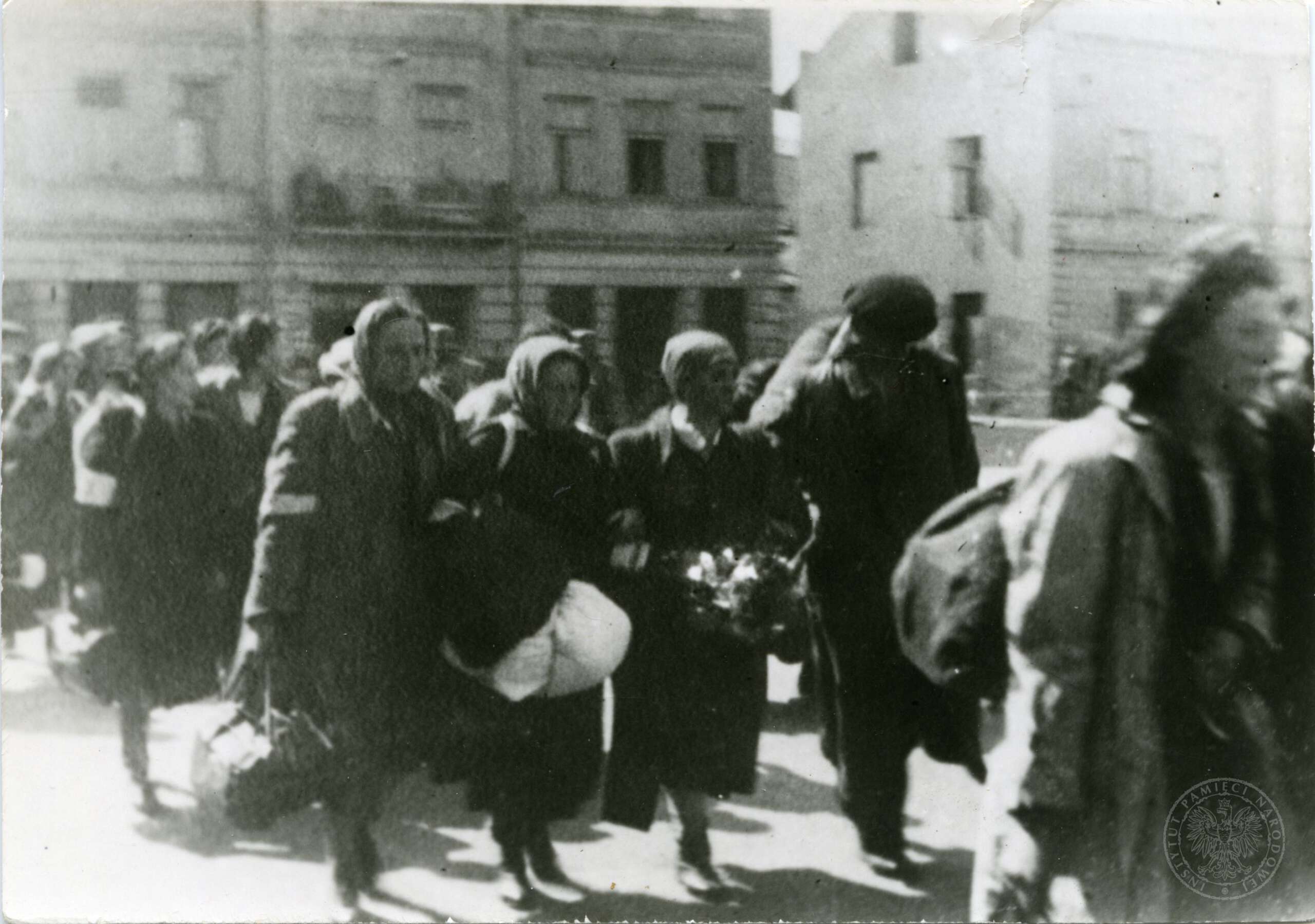 On Saturday, 13th March 1943, the Germans began the final liquidation of the Krakow ghetto

On Saturday, 13th March 1943, the Germans began the final liquidation of the Krakow ghetto. First, the ghetto was cordoned off by SS divisions, Police, Sonderdienst and the Blue police. Jews from the A ghetto were supposed to walk to Płaszów, while those from ghetto B were to be killed, despite being  promised a relocation to Julag I. During the two-day operation, the SS men murdered a few hundred people located in shelters, hospitals and orphanages. Their corpses were transported to Płaszów, where other people, considered ”useless”, were being shot dead. The official total number of 2,000 victims killed in both, the ghetto as well as in Płaszów, does not seem to be exaggerrated, as the original number of 8,000 people who arrived at the camp increased up to over 10,000. Since children under 14 years of age were banned (that would equal their death), their parents tried to smuggle them using various ways.  Those children who got there were hidden, until camp authorities started to get used to their presence. The following day, during the B ghetto liquidation, most people were transported to KL Auschwitz. After the selection process, which included 2,000 Jews, around 500 people were placed in the camp. Others however, were sent to gas chambers.  Very few escape attempts were successful.

The following accounts of the first night after the liquidation are the memories of Tadeusz Pankiewicz, a pharmacist from Cracow who worked in the getto.

”Once busy streets and houses full of people were now completey empty.  The breeze of death had marched the street, visiting every tenement house, every flat. There is no single room in the whole former getto that would not witness some heinous crimes. I walked through this ghost town, after two days of my forced stay in the pharmacy, listening now to my footsteps.  There are plenty of people who had witnessed some of the most disturbing scenes. Plenty of those who had gone through horrible things, but very few, I believe, who had an impression similar to mine, that certain day, right after the displacement, while walking through the streets of ghetto – full of corpses and dried blood yet so completey empty.  (…) The Zgody square looked strange that night. Like from a fairy tale. Right in the moonight, the posts and the barbed wire spread on them, cast check-like shadows on the ground. The doors in houses were wide open, windows completely dark.  No light, no sign of life. Once in a while, only dogs ran past like crazy, hiding under the houses walls. It was impossible to fall asleep that night. The feeling of emptiness and silence was irritating. I was hearing imaginary steps, door cracking or knocking on the window pane. Over the next several days, while entering the ghetto at a late hour, I could hear similar sounds. Then I realised I was not wrong. It was not hallucination. It was a reality. People were giving signs that they are alive and that they need help.”

The guide provides basic information about the ghetto in Kraków, origins, development and liquidation of the camp in Płaszów, living conditions in the camp, the German crimes, prosecution of war criminals, as well as a list of selected publications, a list of terms and abbreviations and a map with a visiting route.

Based on: A Historical Guide to the German Camp in Płaszów 1942–1945, Tadeusz Pankiewicz, The Krakow Ghetto Pharmacy, Kraków 2013