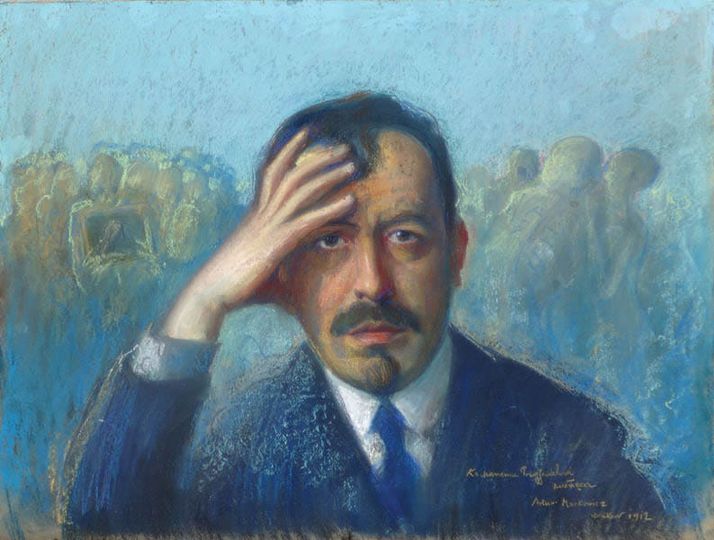 Artur Markowicz , a painter and a graphic designer was born on 3rd March 1872 in Podgórze (currenty, a district in Cracow).

After graduating from gymnasium, Markowicz began his studies at the Institute of Technology in Cracow, yet dropped out soon after. Between 1886-1895 he was studying at the School of Fine Arts where he got his education from Leopold Löffler, Władysław Łuszczkiewicz, Florian Cynk and Jan Matejko. From 1896 Markowicz continued his education at the Academy of Fine Arts in Munich, receiving further education from Franz von Stuck. Between 1900-1904 he was studying at the École des Beaux-Arts in Paris, in  Jean-Léon Gérôme’s class. After returning to Poland, he lived in Tarnów for a short while, only to move to Cracow afterwards. His studio was located in a Jewish shelter for the eldery where he painted its residents and created paintings presenting the life of Kazimierz. Between 1907-1908 Markowicz lived in Jerusalem and in Italy. He travelled across Europe a lot. Cracow, Warsaw, Lviv, Łódź, Tarnopol, Katowice as well as  Berlin, Munich, Antwerp, Vienna and Merano, make a list of cities where Markowicz’s works were displayed. Initially, he created mainly pastels, cityscapes and motives from fishermen’s lives. However, in the course of time, scenes of the life of the Jewish community started to dominate in Markowicz’s artistic work.

Artur Markowicz passed away on 23rd October 1934 in Cracow. He is buried at the new Jewish Cemetery.

Artur Markowicz’s self-portait was painted in 1912. The painting was reproduced in: Artur Markowicz 1872-1934. A monographic exibition. A catalogue of existing and missing works displayed in the Jewish Institute of History and in the Historical Museum of Cracow. Developed by R. Piątkowska, M. Tarnowska, Warszawa, 1994, p. 121.