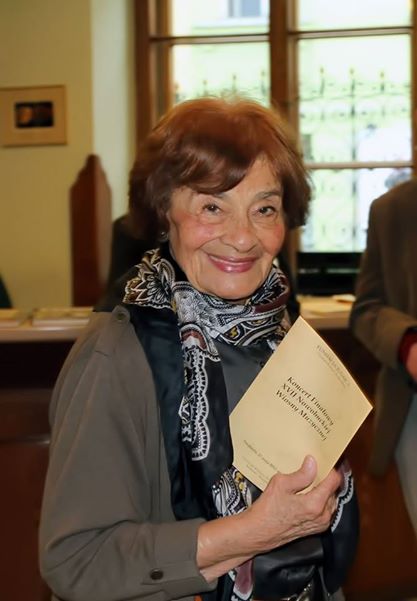 Born on 22nd December 1926 in Podwołczyska near Tarnopol, Janina Ruth Buczyńska was a lawyer and a social activist, closely related to artistic and academic groups in Krakow.

She recalled WWII as most Jews who survived it, namely as a horrific ordeal. After WWII, she found herself in Krakow where she graduated from the Faculty of Law at the Jagiellonian University.  Throughout her life Janina Ruth Buczyńska was closely connected with Piwnica pod Baranami. Her written works were published in the Krakow edition of ”Przekrój” . She was always willing to offer legal advice to the opposition activists. Moreover, Janina Ruth Buczyńska was an active supporter of  the Centre of the Jewish Culture in Krakow (Centrum Kultury Żydowskiej).

Stanisław J. Jaźwiec recalls Ruth Buczyńska as a truly kind person who always had a good word for everyone and who could spread her kindness around. She would see only positive things in people. Ruth Buczyńska was sometimes accused of being too understanding and lax. Indeed, someone who had gone through an ordeal like her would seem to be unlikely to be so understanding. However, behaving differently would have been against her nature. Her skill to notice and highlight another person’s assets was supposed to make them feel appreciated and good.   Janina Ruth Buczyńska’s friend adds that whenever others perceived someone as lousy or ragged, she would notice and appreciate the beauty of the person’s eyes.

Janina Ruth Buczyńska died on 30th August 2012 in Krakow and was buried at the Jewish Cemetery in Krakow.