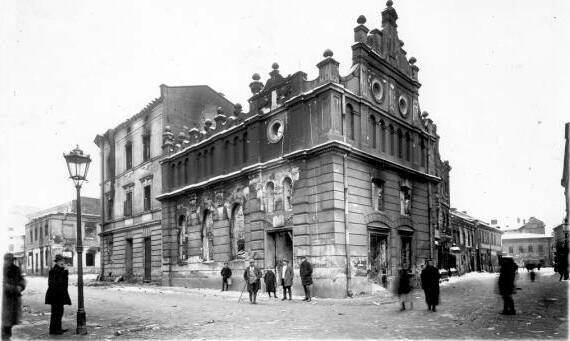 The pogrom of the Lviv Jews

The pogrom of the Lviv Jews started on 22nd November 1918 at 5:30 a.m. in Lviv. Upon an informal approval of the city of Lviv commander, Captain Czesław Mączyński, the Polish army started the massacre at Bóżnicza street which was located in the middle of the Jewish district. The pogrom finished at 8 a.m. on 24th November 1918. According to the report issued by he representatives of the Ministry of Foreign Affairs, the operation resulted in the murder of 150 Jews, burning down of 50 two and three-storey Jewish-owned houses while approximately 500 Jewish shops were fully robbed.  The total number of  Jewish families affected by murders, robberies and thefts came to 7,000, according to a report by dr Leon Chrzanowski and Józef Wasserzug. The direct cause of the aggression towards Jews was a wrong assumption that the Jewish people were supporting the Ukrainians in their battle for Lviv. The truth is however, that the Jewish Militia stayed rigidly neutral at that time. It is worth mentioning that despite announcing the beginning of the riots on 22nd November, general Bolesław Roja declared a state of emergency, which a delegation of Jews informed captain Mączyński about, it was publicly announced two days later, on 24th November. According to the author of ”Kres Iluzji, Grzegorz Gauden, the massacre was not the result of a war-related depravity. It was a product of the nationalism of national democracy which created the phantasm of  hostile Jews, in terms of religion, ethnicity, economy, politics and society. The ideology and propaganda of the National Democracy movement brought quick results – its supporters used the first opportunity to move from words to deeds. They resorted to physical and symbolic violence. Once the first wave of excitement brought by the robberies and murders was over, anxiety came. The pogrom had to be explained somehow. Therefore, some partial records include opinions that the Jews were unloyal towards the Poles and deserved everything that had happened to them. Captain Mączyński, responsible for the massacre, was rewarded with all, then- possible honours, including  the Silver Cross of the Order of Virtuti Militari and the Cross of Independence with Swords for his ”contribution to regaining the independence”. Between 1922-1927, he was a member of the Polish Sejm. Regarding the pogrom, nobody was prosecuted and the affair was covered due to political reasons.

The image shows a burned down Lviv synagogue during the pogrom carried out by the Poles on 22nd – 24th November 1918. (Picture taken from a public domain)