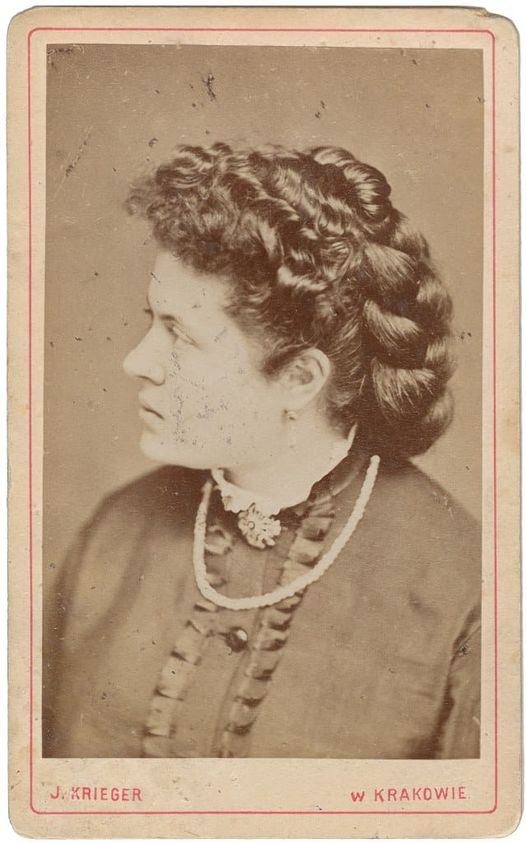 Born in 1846, one of the first female photographers in Krakow, Amalia Krieger , died on 21st September 1928. She was ”(…) appreciated and well-known  in the artistic world of Krakow and well beyond it thanks to her personality and artistic education” (Nowy Dziennik 1928, no. 260,  the 27th September issue, p. 9). She learned the profession at her father’s photography studio which she went on to run with her brother Natan after their father’s death. The studio operated non-stop until 1926. She managed to save her family legacy including a unique collection of photography portraying the history of the city. After making the decision to shut down the studio in 1926, Amalia Krieger handed her extensive collection of photographic films and the studio equipment to the city of Krakow.  Additionally, she set  up the Ignacy, Natan and Amalia Krieger Foundation whose aim was to ”preserve and properly store the films of Krakow’s old monuments, to reproduce them and use for the academic purpose as well to educate professional photographers”. Upon the city authorities’ decision, Amalia’s precious gift was placed in the Dr Adrian Baraniecki Museum of Industry. After its liquidation in 1950, they were handed over to the Academy of Fine Arts. In 1967, the University authorities decided to pass the collection to the Historical Museum of Krakow. Thanks to Amalia’s  bold decision, we can still enjoy her valuable gifts until today.

Picture courtesy of the Historical Museum of Krakow.