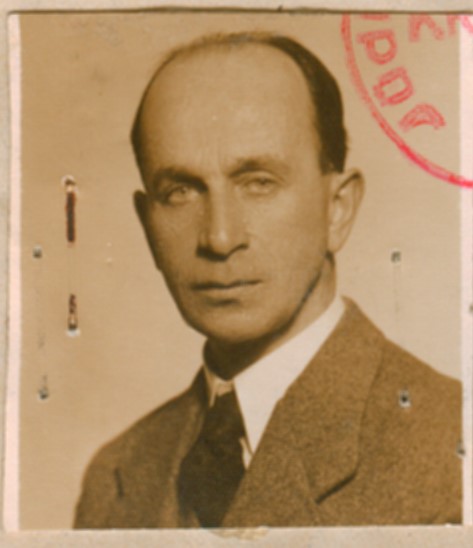 Born on 17th June 1891 in Kołomyja, Jakub Stendig, son of Anschel, was a Krakow-based architect. His projects include buildings at Wietora 7, Komorowskiego 5, Karłowicza 13 and Metalowców 3. A 1915 graduate of the Buildings Department at the Industrial School of Krakow who also studied Architecture at the Academy of Fine Arts in Krakow where he obtained  a builder’s licence in 1931.  During the occupation times, Stendig was forced by the Germans to develop the infrastructure of the Płaszów camp. After the WWII outbreak, he was made accountable for organising and managing a Construction Departent.  Apart from that, Stendig volunteered to rescue  synagogue monuments.  He collected several items and documents which he then catalogued. These included various liturgical relics like 150 Torahs, curtains and lambrequins, sacred chests gold lids, candleholders, menorahs, tablecloths, antique chronicles, a set of embroidery and many other valuable everyday use items.  Thanks to Stendig’s efforts, it was possible to transport the remaining items to the getto which incuded benches, tables, plenty of valuable books and prayer books. Stendig suggested that all valuable items be placed in a temporary storage room in the attic of the funeral home at the new community cemetery in Krakow  (at Abrahama Street). The place seemed safe and it did  not occure to anyone that one day the premises would be the centre of the concentration camp. For a long time the Germans were unaware of  all the hidden treasures. Eventually ,these were discovered and taken.  The old cemetery at Miodowa street was closed by the Germans in 1941 and it was followed by vast devastation and thefts. After WWII Stendig made efforts to get the sold headstones back in order to place them back at Miodowa street.  After the ghetto liquidation in March 1943 Stendig got to the Płaszów camp where he worked at Bauleitung  (camp developing board). He worked on the most crucial projects (bakery, bathhouse and barracks). Right after WWII ended, he began to write down the history of Krakow-based  Jews.  Stendig emigrated to Israel with his family in 1948 where he passed away young in 1952 as a result of war experiences and diseases.
Holding various positions throughout his life, Stendig was recognised as a well-qualified specialist with a huge contribution to the religious community. His numerous initiatives served the society. Hiding the Jewish monuments, protecting the  cemetery at Miodowa street from  damage, developing the infrastructure at the Płaszów camp which served all prisoners and facilitated their lives. He was an epitome of a just and honest man who stayed true to his values. When being in the camp, Stendig did not make any deals with the prominent individuals, which consequently, put him trouble several times.  He was rejected from Schindler’s list which resulted in him and his relatives being sent to a regular transport.

The note was prepared on the basis of the research by Ryszard Kotarba.