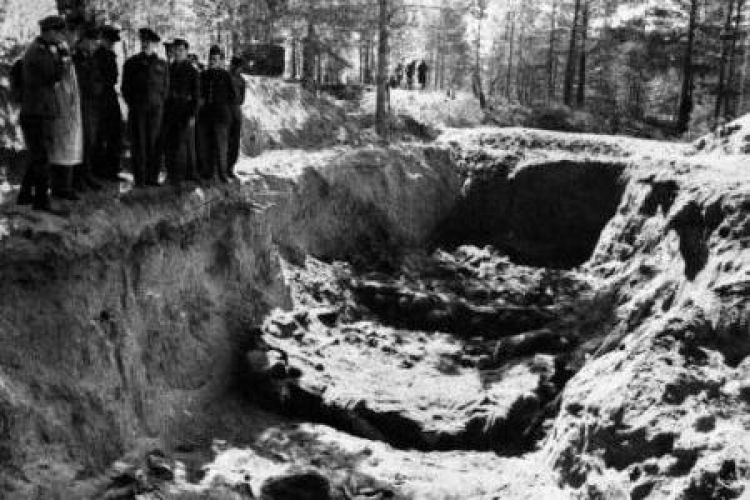 On 11th April1943 the Transocean Agency informed about ”discovering a mass grave with the remains of 3,000 Polish officers”. It was the first official German announcement regarding the Katyn massacre.

In April 1949 NKVD began mass executions of Polish officers who were captured after 17th September 1939. The lowest estimated number of people executed by the Soviets during the Katyn massacre is around 20,000. The group executed by NKVD  consisted of 500 Jews, soldiers of the pre-war Polish Army including Baruch Steinberg (Chief Rabbi of the Polish Army), Mieczysław Birnbaum (a translator and a publicist), well-known Warsaw doctors: Henryk Brendel (GP and gynaecologist), Bronisław Karbowski (otolaryngologist)  as well as Maksymilian Landau  – a legionnaire, a participant of the Poish-Soviet war, but most importantly, a Polish and German teacher. Other executed Jews from Krakow were Markus Anisfeld (a chemist), Gustaw Baumfeld (a writer and a publicist), Izaak Bierer (a building technician),  Aleksander Blatt (a lawyer),  Wiktor Choczner (a banker), Maurycy Epstein (Head of the Department of Surgery and Orthopedics at the Krakow hospital), Jan Fromowicz (a chemical engineer), Dawid Jurkowicz (a chief doctor of the 12th Infantry Regiment), Maksymilian Krengel (a dermatologist) and Aleksander Rosenzweig (an engineer).