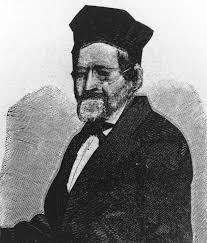 For many years he was linked with Cracow (from 1830’s until 1863, when Mieses left to Toruń).  Associated with  progressive circles, a prominent expert on the history of Kabbalah, European philosophy, a supporter of Haskalah.

Following Alicja Maślak-Maciejewska’s monograph regarding Cracow’s progressive circles, in 1861, it was necessary to employ a permanent preacher, when the construction of a progressive synagogue was at the finishing line. Most importantly however, it was crucial to invite someone to give the innauguration sermon. Even though Izaak Mieses dealt with trade and wasn’t a professional preacher, he was the one who was chosen. He did have letters of recommendation from Solomon Judah Löb HaKohen Rapoport, known as Shir, yet Mieses had no previous experience as a preacher or a rabbi. Although it is unknown where the decision stemmed from, we may assume that Mieses’ reputation for his great knowledge of the Talmud, European philosophy as well  huge respect that people had for him were the reasons why he was chosen. All these advantages as well as Mieses’ activity (f.ex. being outspoken against a radical religious reform) showed not only his religious traditionalism but also his open mind for the demands of the modern world.

Mieses’ first sermon, also being the first sermon given in the newly-built Sempel Synagogue, took place at Hanukkah in 1861 and turned out to be a huge success. It attracted loads of people and met with positive feedback. (…) Sermon’s high level mixed with Mieses’ great reputation lead to him being invited to give regular, monthly sermons.

Due to his deteriorating financial situation, Mieses was forced to move to Toruń. According to literature, his departure caused a feeling of emptiness in the city as well as the „degeneration of academic life”. Once in Toruń, Meises quickly got in touch with the Jewish community where he significantly marked his presence.