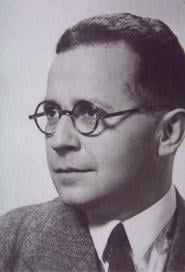 Julius Feldhorn was born in Tarnopol on 17 August 1901. He was a historian of literature, a teacher, a poet and a translator.

He graduated from the Philosophy Department of the Jagiellonian University in 1923 and received his doctorate in 1927. Right after, he started to teach Polish in a Jewish school in Kraków. He worked for several newspapers and published books of poetry. He was well-liked by his pupils.

He fought at the outbreak of the Second World War and was imprisoned in Lublin, but escaped to Lvov. After the outbreak of hostilities between Germany and the Soviet Union he hid in Wiśnicz and Swoszowice, but was captured by the Germans and shot in August 1943, may he rest in peace.