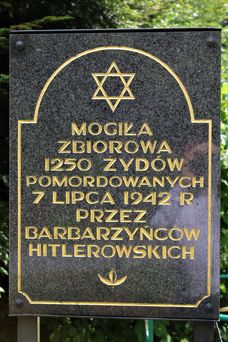 Murder of Jews in present Nowy Żmigród and liquidation of the ghetto in Rzeszów.

On 7 July 1942 Germans murdered around 1250 Jews from Nowy Żmigród. Most Jews stood on plac Bala, following German instructions. 750 were allowed to remain in the city and received a stamp on their documents. Others were sentenced to death, among which older, sick and handicapped people. They were selected based on looks and ordered to move out of the group. Those who were too slow were beaten with truncheons and even bottles. About 1000-1250 Jews were selected and taken to the woods neear Hałbowa and shot. Others were taken to Jasło.

The first liquidation of the Rzeszów ghetto also took place on 7 July 1942. That day the Germans murdered about 350 people and made others go through a selection on the grounds of the Jewish cemetery, which they had already destroyed. 16,500 people were thus selected. They were taken to Belżec and about 3000 were shot right away.

May they all rest in peace and may the murderers be punished forever.