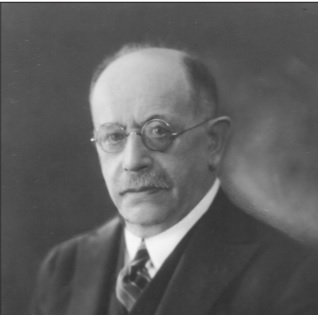 Leon Sternbach, son of Józef, was born on 2 July 1864 in Drohobych. He was a professor of classical philology, a specialist in Byzantium and member of the Polish Academy of Science.

He attended school in Drohobych, then university in Leipzig and Dresden (1882-3) and in Vienna (1883-5), where he was awarded a doctorate. His post-doctoral research was in Lvov, where he became an assistant professor. However, his professional and scientific life was entwined with the Jagiellonian University (UJ). He became an Extraordinary Professor in 1892 and a Full Professor in 1897. In the Academic year 1904/5 he was the Dean of the Department of Philosophy. In 1893 he joined the Academy of Science, later called Polish Academy of Science. In 1918 he was a doctor, honoris causa, of the UJ.

He retired in 1935 becoming a professor emeritus.

He is considered one of the best specialists on Byzantium in the world and modernised research in that field. He taught many people who would become later famous Polish scholars.

After the war began, he was sent to the concentration camp at Sachshausen in November 1939, within the Sonderaktion Krakau, and he was murdered on 20 February 1940, may the murderers pay dearly.

He is buried in the New Jewish Cemetery in Kraków, may he rest in peace.

The photo is taken from the Archive of the UJ