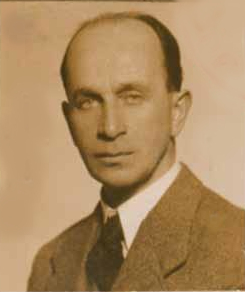 Jakub Stendig, son of Anschel, was born on 17 June 1891. He was an architect from Kraków (buildings at Wietora 7, Komorowskiego 5, Karłowicza 13 and Metalowców 3). He graduated from the Department of Construction in the Industrial School of Kraków in 1915. He also studied in the Department of Architecture in the Academy of Fine Arts in Kraków becoming a fully authorised Construction Manager (koncesjonowany budowniczy) in 1931.

Right after the beginning of the war the Community had him lead the building department. Jakub Stendig, out of his own will, tried to save the artefacts from the synagogues. He collected objects and documents and then he catalogued them, among which many liturgical implements, including 150 torah scrolls.

Thanks to his efforts, he was allowed to take into the ghetto much of the furniture, as well as many expensive books and siddurim. He found a hiding place for them in a place that was difficult to access, the attic of the pre-burial house of the new cemetery of the Jewish Community, ul. Abrahama.

In 1941 the Germans closed the old cemetery on ul. Miodowa and looted the property. Jakub Stending, after the war, tried to find the gravestones and bring them back to ul. Miodowa. After the destruction of the ghetto in 1943 he was sent to the camp in Plaszow and was assigned to the direction of construction work. He worked on the most important buildings. After the war he started to write a chronicle right away. He emigrated to Israel in 1948 and died a premature death in 1952. May he rest in peace.

He was a good architect and was of great service to the Jewish community and to society at large. He was considered a very honest man.

(based on the research of Ryszard Kotarba)