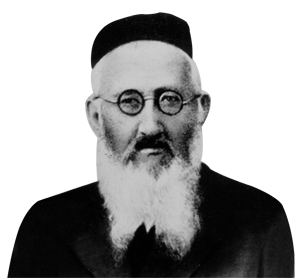 Dawid Alter Kurzmann was born in Rzeszow on 25 May 1865. In Kraków he was a trader and a philanthropist.

He came to this city in 1887 and lived in Kazimierz on ul. Mostowa 10. After the expulsion in 1941 he was forced to live near Plac Zgody 16 (today’s Plac Bohaterów Getta). He was connected to the chassidic movement and with the Reb Aron house of prayer on ul. Józefa 33. At the same time he was active in the Agudat (“Agudat Israel” , an international political party among Orthodox Jews) and was the vice-president of its Kraków branch. He was active also in the Jewish Community, where he was a council member and responsible for religious matters. Starting already a few years before the war, Kurzmann had supported the oldest Jewish orphanage on ul. Dietla 64, giving the children excellent living conditions.

During the was he sacrificed all his valuables to save Jewish orphans. The circumstances of his death, as well as his life, would compare him to Janusz Korczak.

The Orphanage during the occupation was in Kraków’s ghetto, first on ul. Krakusa 8, then on ul. Józefińska 41 (a plaque can be found there today). At the moment of its destruction (28 October 1942) there were around 300 children there. The youngest were murdered on the spot. Some taken to be murdered in other places. The rest were taken to plac Zgody, where the Germans gave them the choice to go into forced labour or face death. Dawid Kurzmann kept calm and did not want to upset the children, so he went with those who were going to be murdered through ul. Lwowska and ul. Wielicka to the train station at Płaszów. They were all taken to Belżec, where they were murdered. May their souls rest in peace and may the murderers find no solace.

In 2014 Grzegorz Siwor wrote a book called Enoszijut. Stories about Dawid Kurzmann. In May 2019 the city of Kraków dedicated one street to Dawid Kurzmann.