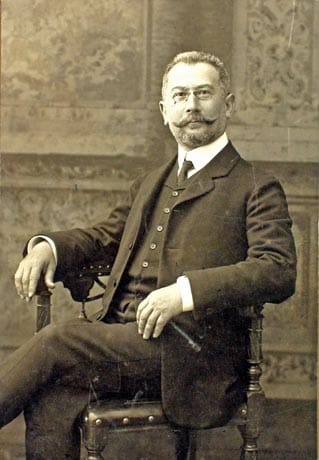 Józef Michał Rosenblatt, a councillor, lawyer, professor of the Jagiellonian University in Cracow, the son of Joachim and Karolina, née Einblid, was born on 19th March 1853 in Cracow.

A graduate of St. Ann’s Gymnasium in Cracow and the Jagiellonian University at the Law Department. In 1876, Rosenblatt obtained his PhD title in Law. The government scholarship enabled him to participate in lectures and seminars in Berlin, Leipzig and Munchen. In 1877, after his return to Cracow , he obtained his postdoctorial degree and started  his academic and didactic work on criminal law and criminal trial at the Jagiellonian University. Rosenblatt  obtained the title of Associate Professor in 1884, only to become a Professor in 1893. Between 1877-1882, he worked at a law office, mosty as an attorney in criminal cases.  He published several notable works in ”Czasopismo Prawnicze i Ekonomiczne” (A Legal and Econimic Magazine), Lviv’s  ”Prawnik” (Lawyer), ”Przegląd Sądowy” (the Judical Review), ”Gazeta Sądowa Warszawska” (the Judical Magazine of Warsaw) as well as in scientific magazines issued in Germany and Austria.  His most recognised works include:  ”A lecture on universal Austrian criminal law” (Cracow, 1884), ”An appointed witch – the history of cases against witches in Poland” (Warsaw, 1882). Additionally, Rosenblatt wrote some popular pieces including  ”About a dispute” (Lviv, 1878).

Several positions held by Józef Michał Rosenblatt include a member of  the Legal Commitee in Cracow City Council as well a variety of other Commitees –  Land, Statutory, Tram and Waterworks.  What is more, he was the chairman of the Educational Facility for the Israeli craftsmen in Carpentry and Locksmithing.  Rosenblatt  was awarded the Order of the Iron Crown III  following the emperor’s resolution dated 26th April 1913.

Józef Michał Rosenblatt died on 31st May 1917 in Baden and was buried at the new Jewish Cemetery in Cracow.