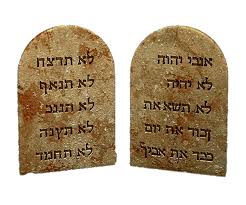 What were the letters on the commandments?

History of the Hebrew alphabet

Since the earliest times of society’s development there has been a need to present reality, to communicate, to leave traces of the events taking place.
The main form of communication is writing – a spoken language recorded by means of graphic signs. An alphabetical system has developed from the initial pictorial script, Hebrew lettering is derived from the oldest surviving alphabet of the world – the Phoenician alphabet.

The Phoenician alphabet, which is a modification of the pre-existing proto-Canadian script, was most probably created for the needs of the developing trade. During their expeditions around the Mediterranean, the Phoenicians became acquainted with various types of notation, including complicated Egyptian and Canaanese writing, so they created a simplified system of marking consonant sounds, called the alphabet. This invention was a breakthrough in the history of human notation. Alphabetical writing was much simpler and more effective in transmission than cuneiform writing, let alone pictorial writing. This 22-character Phoenician alphabet was used by the Semitic peoples of Canaan, including the Israelites, after settling in the area. This alphabet, through the Hebrew and Greek writings based on it, gave rise to all the alphabets used today in Europe and in Arabic.

The individual letters of the Phoenician (and therefore Hebrew) letters were formed on the basis of the principle of acrophony, in which, for example, for the designation (naming) of the letter b, a word starting with this consonant (fen. bēt – house) was chosen and written with a sign resembling the outline of a house. Later the notation was schematicised and transformed into the letter “bet” . Another characteristic feature of the Phoenician alphabet, which has been taken over by the Hebrew alphabet, is its consonant character (no letters corresponding to vowels that have been read from the context). At that time, Hebrew functioned largely as a holy language, reserved for prayer, liturgy and the recording of the Holy Books – although it was not a dead language, as one commonly writes. Parallel to the Canaanese languages, Aramaic language developed in this area – also the language of the Bible, present in the Old Testament, but to a limited extent. Initially the Aramaic people also adopted the Canaanese to write their language, but by simplifying the way the letters were written, they developed it in a new direction.

Slow evolution led to the emergence of a period of Babylonian captivity (598 – 539 BC) and after that, square writing (Hebrew ketaw meruba – the name comes from the shape of the letters written in a square). The Hebrews used the Phoenician alphabet during the entire Israeli monarchy (X -VI century BC). Therefore it is also called Paleohebian (Old Hebrew) or Phoenician-Hebrew (Hebrew ketaw iwri). The Jews used it until the time of the Babylonian captivity (VI-V century B.C.). Later, together with the Aramaic language, they took over the so-called square writing, which is still used today. Over time, the square writing obtained two forms, depending on the tools used to write manuscripts. One is Ashkenazi writing; sharp, shaded letters, written in pen. The other form is Sephardic; soft and rounded, written with reeds. Today’s Ashkenazi writing was created from the Ashkenazi periodical. This writing can be found in contemporary editions of the Hebrew Bible.

The Hebrew alphabet consists of 22 letters and does not contain vowels – Hebrew writing is consonant writing (abjad). The original consonant record of Sacred Scripture has been vocalised over time, but in modern Hebrew often only consonant records are used. Vowels are marked with dots and dashes (usually under, but also above or inside the consonant). Each consonant can be the “carrier” of a vowel, which is usually pronounced after it. Biblical Hebrew has both upper and lower case letters; it has only majuscule, or upper case letters. Each consonant is built on the plan of a square, and in Hebrew it is written from right to left, starting each letter from the top left corner of the square.

In the light of the above information, the question arises: what were the letters on the Commandments and was this alphabet forgotten? This question is discussed by wise men in the Talmud:
“Mar Zutra said, and others say that Mar Ukwa: in the beginning, the Torah was given to Yisrael in Old Hebrew (ktaw iwri) and sacred language (Hebrew). Again, it was given to them in Ezra times in the presently used square writing (ktaw Ashurit) and in Aramaic. The Jews chose for themselves which Ashurite and the holy language, and which Ivri and Aramaic language they left for the ordinary people. Who were these ordinary people? Raw Chisda said: They were the Temptations (Samaritans). What is which iwri? Raw Chisda said: That’s who the livuna is.”

WHAT WERE THE LETTERS ON THE COMMANDMENTS?

Rashi explains: “Which livuna is a clumsy writing, with capital letters commonly used in those days on amulets and mezuzas. (Sanhedrin 21b)

If it is true that the tables of the Ten Commandments were written in a different writing from that of the Ashur, it would mean that the writing in which the Torah is now written is that of foreign origin, and that the Jews rejected the alphabet in which God gave them His word. Rabbi Jehuda Hanasi maintains that ktaw Ashurit was originally the sacred scripture in which the Torah was given and has been in common use for many centuries. But in the last generations of the First Temple, people began to fall into idolatry and other sins, which led to the destruction of the Temple and exile. People then ceased to be worthy of the use of the saintly Ashur. God caused the Jews to forget this noble scripture and began to use the common ktaw iwri. They used it until the time of Ezra, who restored ktaw Ashurit. According to Rabbi Jehuda Hanasi, the name Ashurit does not come from Assyria, but from the word ‘happy, praised’. Similarly, the Rambam (Jadayim 2:5) explains that the name comes from the word Ashre ‘praiseworthy, happy, successful’.

Commentators explain Mar Zutra’s opinion this way:
The boards were in fact given in a letter known later as ktaw ashurit. This is how the Torah scroll was recorded, kept in the Temple. And it was this holy writing that saw Moshe in Heaven. But neither Moshe nor the people wanted to use God’s holy writing every day. They felt the holiness of this scripture so much that even the Torah scrolls for general study preferred to be written in the common ktaw iwri. As time passed, more and more people never had the opportunity to see which Ashuri and no longer remembered what it looked like. Only a few wise men knew the shape of the letters in which the ashurite was written. Therefore, when during the feast of Balthazar (Daniel 5) a sign appeared on the wall, nobody could read it, because it was written in this very sign. Only Daniel knew this writing because, as leader of Jisrael, he had access to the tradition passed down from the time of the Moshe. (According to Rabbi Reuwen Margulies, the fact that even the Assyrian members of Balthazar’s court could not read the inscription on the wall, confirms the opinion that whoever was an ashurit was not from Assyria). The inscription that appeared on the wall made people realize that there is a really sacred Jewish writing, connected with the Torah, which was forgotten. So Ezra taught the Jews this writing and only the Samaritans remained using the old ktaw iwri. Radbaz provides yet another solution. He says that the first tablets were given in which Ashur, but after the Jews sinned by making a cast of the golden calf when God gave them the second tablets, they were already written in which iwri.