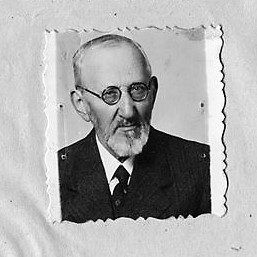 Born on 25th May 1865 in Rzeszów, Dawid Alter Kurzmann was a local merchant, social activist and philanthropist in Krakow.
After moving to Krakow in 1887, he lived at Mostowa 10. After the 1941 expulsion, Kurzmann was forced to reside at Plac Zgody 16 (currently – Plac Bohaterów Getta). He was connected with the Chassidic movement and with the Reb Aron house of prayer located at Józefa 33. At the same time, Kurzmann was very active at Agudat Israel – an international party uniting Orthodox Jews, where he held the position of a vice-chairman of the Krakow branch. Being incrediby active in the local Jewish community, he joined the board of a newly- opened Jewish Religious Community in 1937, where he was in charge of religious matters. What is more, Kurzmann supported the oldest Jewish orphanage located at Dietla 64 for many years before the outbreak of the war. Not only did he provide them with excellent living conditions but he also sacrificed all of his most valuable posessions to save the Jewish orphans.  The circumstances of his death as well as his life allow us to call him Krakow’s Janusz Korczak.  During the occupation times, the facility for the Jewish orphans was located within the Krakow getto, first at  Krakusa 8, then at Józefińska 41 (There is a commemorative plaque there). During the liquidation on 28th October 1942,  there were around 300 children in the orphanage. The youngest ones were transported away or murdered on the spot, while the remaining ones were walked to Plac Zgody. Over there, the staff of the orphanage was offered a job at a new facility. Their rejection of the offer meant death sentence. Keeping his composure, so as not to scare the already frightened children,  Dawid Kurzmann walked the Lwowska and Wielicka street together with his proteges, all the way to the Station in Płaszów. They were all taken to the Bełżec camp where they were murdered.

In 2014, Grzegorz Siwor wrote a book entitled ”Enoszijut. The story of  Dawid Kurzmann”, while the City Council agreed to honour one of the street with his name.